We are thrilled to announce our partnership with Unioverse, the "Roblox" for AAA game developers.

Unioverse aims to be the ultimate toolkit for developers, helping them make whatever kind of game they want and keeping all of their revenue. We are proud to support the Unioverse's expansion, and beyond excited to see what kinds of games will be developed in the future!

We look forward to working with them!

The Unioverse is an epic sci-fi story being created by Random Games Studio - a world-class team of artists, writers and developers who have expanded the narrative worlds of Star Wars, Halo, Call of Duty, Marvel, The Walking Dead and more.

A series of video games being developed by gaming industry vets who have worked on enormous titles like Grand Theft Auto, Crackdown, League of Legends and Star Citizen. Unioverse will be reinventing the way video games get made. As the team said: “it’s like Roblox, but for AAA game developers.”

“Rarely do you see a truly disruptive concept, cutting-edge technology and a stellar founding team converge in a single startup like this,” said investor Raanan Bar-Cohen, Co-Founder of Resolute Ventures. “The Unioverse is poised to change the relationship between game developers and players in a way that benefits everyone involved.”

Most importantly, the Unioverse is a “community-owned” franchise. That means all the AAA-quality art, character models, music and more that the team creates are made available to other game developers and the Unioverse' community royalty-free. Anyone can download Unioverse assets to make their own creations (comics, board games, T-shirts, etc.). Even better, these creations can be sold and monetized without the team taking a cut.

Check out this one for more details about Reyu.

The Unioverse is a massive, sci-fi game-first franchise. The story is being developed by a team of world-class writers and artists who have written for and expanded the narrative worlds of huge entertainment properties of Star Wars, Marvel, Call of Duty, The Walking Dead and more.

Unlike those titles, however, the Unioverse is what we are calling a “community-owned” franchise. This means that you, whoever you are, wherever you are, will have access to the same art, models, music and more that we use, to create whatever you want.

Ancient8 is developing the marketing and community infrastructure for Web3 Gaming.

Ancient8 and PGDAO are proud to announce our new partnership! We're bringing together our two organizations to create a unique gaming guild alliance for the Web3 gaming ecosystem. This partnership will provide a platform for gaming communities to come together and compete in a fun and friendly environment. Our goal

Ancient8 is thrilled to announce our latest partnership with Shrapnel, one of the first moddable AAA FPS blockchain games in the space. 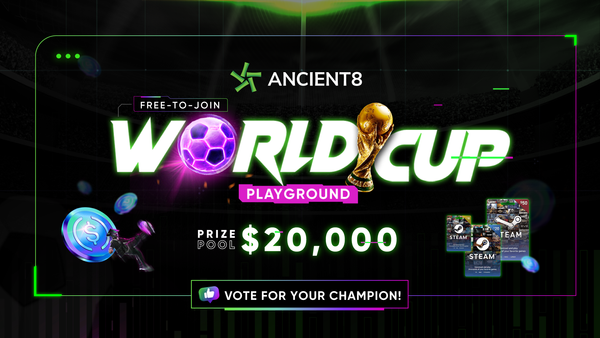 It’s hard not to get caught up in the excitement of the greatest event in football, so we decided to enhance the World Cup experience for our community and football fans.